The first major decision The Shirt Project executive committee makes is what color the next year’s Shirt will be. These days, we choose the vendor, then the color, then the design, but in the past, choosing the color often came well after the committee members had developed the design.

A great example is The Shirt 1998. I found multiple color variations in our closet in LaFortune Student Center, the room where we keep old materials — and a few old Shirts! — from our 25-year history. Did you see it on Instagram yesterday?

John Maus, president of The Shirt Project from 1998-1999 gave me some insight into this particular Shirt:

“The color was first decided based upon the blue and green alternating scheme,” Maus said. “I seem to remember that the colors traded off every other year.

“As my year was a ‘green’ year, we were interested in doing something a little different. Military dress elements were popular at the time.”

Now, of course, there is no alternating color scheme. The executive committee selects a new color each year based on design inspiration, vendor selection and a variety of other factors.

Maus said these color selections all came from Champion, but the design inspiration was a print he had seen and a song he had heard:

“The design was based on the ‘Here Come The Irish’ chant,” he said. “I'd attended games as a kid and remember the chant as haunting and powerful.”

Maus said he faced fan superstition when designing his next Shirt in 1999.

“I had to overcome a lot of support for the idea of drawing attention to the fact that ND had won the National Championship in '66, '77 and '88,” he said. “There was an idea that we draw upon this coincidence in '99. Starting the year off 1-3 proved my decision to go in a different direction.”

Even still, he said, The Shirt 1999 remains a fan favorite and Maus’s own favorite. Superstition, tradition and history are all factors that students have had to consider when creating The Shirt… how would you incorporate those elements if you were the designer? 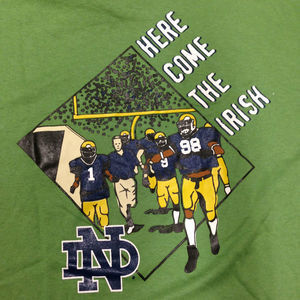 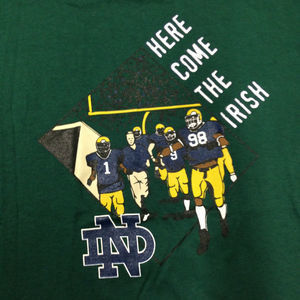 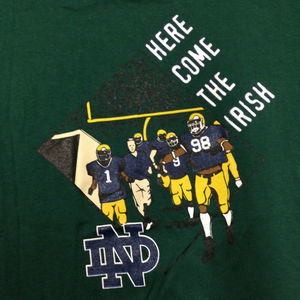 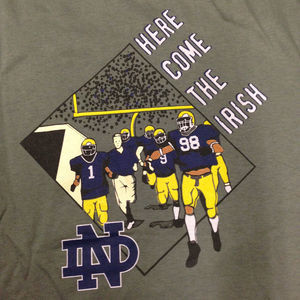 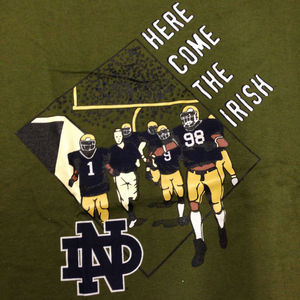 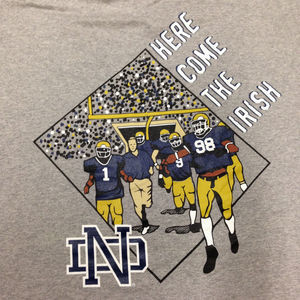 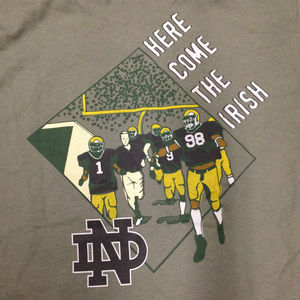