In case you missed the Instagram post, members of The Shirt Project Executive Committee traveled to Chicago today to see initial prints of The Shirt 2014! But you won’t find any spoilers here tonight—just mark your calendars for Unveiling on April11.

These days, the process of designing The Shirt spans from November to February. Vendors apply for The Shirt contract in November; we choose a vendor before Thanksgiving and a color before Christmas; we finalize the design in January and February and begin to see prints of it by February and March.

That’s not the way it always was.

Katie Crossin Coogan ’06 helmed the design process for The Shirt 2004, which marked The Shirt’s 15th anniversary. She said her process hinged largely on picking the student designers, who would apply with what was essentially a final concept that Katie could tweak before sending it to the manufacturers.

“[Brittany Becker ’04] designed it, and she had of course a couple iterations, but then we put one design out when we did a bid … and some of the vendors decided to give us a couple options and those are what those are,” Coogan said, referencing the photo seen here and on Instagram yesterday. “Those are all samples that we received back. 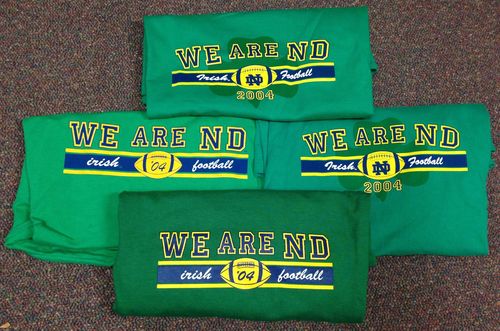 What was nice about that was that [the potential vendors] showed us kind of what else could be done if we wanted to tweak it, so for example, the shamrock wasn’t what we ended up going with. I think part of it was [the vendors] showing us their capabilities, like if you wanted to have this shadowed shamrock, you could have it.”

Coogan said she worked much more closely with the vendors, asking them “what you would like to do with The Shirt” and letting them take a stronger role in the design process.

“Brittany had already designed it and we’d vetted and all those things before we went to the vendors, and it was still a competition at that point where people submitted ideas to be chosen as the designer,” Coogan said.

Beyond the nuts and bolts of organization and protocol, Coogan talked about the inspiration for The Shirt 2004 and its particular shade of green.

“The colors of green were actually a huge deal because The Shirt had just gained a lot of momentum with Ty Willingham’s season,” Coogan said. “In 2002 with the ‘Return to Glory’ … it became much more of a thing to wear green to Notre Dame football games. When I was growing up, everybody still wore blue and gold.

“It was a big decision for us in 2004 to decide if we wanted to do green again,” she said. “So what ended up happening was I actually met with Coach Willingham to discuss it with him, which was a great experience.

“I asked him about it … and he just didn’t miss a beat. He said ‘I would hate to see the green go away, we have such a good thing going, and such momentum.’”

Coogan said she and Becker drew heavily on Shirts of the past as inspiration for The Shirt 2004.

“It was sort of that we were going for a vintage vibe rather than just we were looking at old Shirts and going off of one of them,” she said. “It ended up having sort of a smacking of the 1990 one. We were going for vintage originally and we were drawing inspiration from the old ones, from the archives.”

Originally published by The Shirt Committee 2014 at theshirt.nd.edu on February 28, 2014.